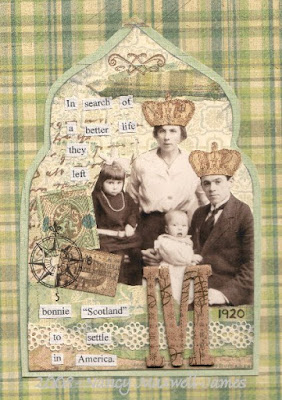 This weeks theme at Gothic Arch Challenge is to create an arch using “heritage” as your theme. I decided to use this photo of my Grandparents – Peter and Jeannie Maxwell with my Aunt Greta and Uncle James. It was taken right before they left their homeland of Scotland and came to America to settle. My Dad and his brother Jack were born in America a few years later.

My grandfather was a 7th generation coal miner. He came to America settling his family in Terre Haute, Indiana. He mined coal in Indiana and also for a time in Colorado (leaving his family there)…a few years after my Dad was born they moved to Detroit, Michigan. Grandpa eventually worked on the assembly line for Ford Motor Company. Grandma had a job sorting seeds for Ferry-Morse Seed Company.

My Grandfather died shortly after my 4th birthday (I was born on his 70th) and I remember him being a kind and gentle man. He was also a poet. My grandparents were proud to become American’s, but also very proud of their Scottish heritage.